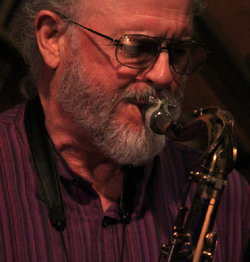 Saxophonist Duncan Martin has been playing jazz in the New England area for fifty years. He first performed at age thirteen in a five-horn dance band at the New Bedford Yacht Club.

At Phillips Exeter Academy, Duncan became the lead alto player and co- leader of the Royal Exonians, a school dance band which performed at in- school and exchange concerts. During his four years at Exeter, he formed the Cubalibra Quartet. The band's music was saved in vinyl by Vogt Recording Studio, Wellesley, MA, in 1960.

While attending Boston University, Duncan played lead alto in the Gary Berger Big Band, a college organization based at Harvard. At the Berklee College of Music he studied woodwinds with Joe Viola. During those years, Duncan formed a quintet and began playing commercial engagements.
After graduation, Duncan taught instrumental music at the Elementary and Jr. High levels in Westborough MA. for eleven years. He built the concert band from thirty to ninety players in the 400 student Jr. High and established a sixteen piece jazz ensemble. He continued to perform with the Duncan Martin Quintet as well as his funk band, Sambar.

He has been teaching saxophone, flute, clarinet, and recorder as well as theory classes and jazz ensembles at the John Payne Music Center since l980. He is the conductor and arranger for the John Payne Student Saxophone Choir whose performances include five TV appearances. The Choir has performed at Ryles', the Tam O' Shanter, the Regattabar, Sculler's and many other New England venues. Duncan has conducted the Choir for President Clinton on two occasions.

Duncan has performed and recorded with the “What’s New” jazz ensemble and the “Shimon Ben-Shir Group.”
Call 617-277-3438 now (or email info@jpmc.us) to schedule a saxophone, flute, or recorder lesson with Duncan!  No registration fees.
Powered by