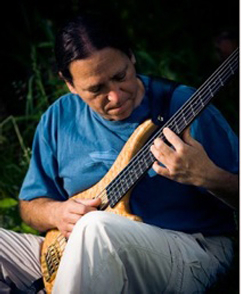 Bassist Shimon Ben-Shir has been teaching ensembles at the JPMC since 1994. Originally from Israel, he has performed with the Bustan Abraham Band, a Middle Eastern group which has performed at numerous music festivals throughout the world.

Shimon is also a part of the "What's New Jazz Septet" which is a composer's collective project including JPMC instructor Duncan Martin. Shimon's compositions on the group's 1995 recording received praise from The Jazz Friend’s Review’s Joe Finn: “ I feel the writing of bassist Shimon Ben-Shir is especially praiseworthy. His tune Dexwhich ends the album is reminiscent of a Mingus band;loose and contrapuntal with a formal asymmetry.”

Over the past several years, Shimon composes for and leads his own band, The Shimon Ben-Shir Group, which frequently performs to packed houses throughout the area, including Ryles Jazz Club and the Acton Jazz Café. Band members include JPMC sax instructors Diane Wernick and Duncan Martin as well as guitarist/ensemble instructor Andy Solberg.
As an ensemble instructor, Shimon believes that playing music should be fun, not overwhelming or frustrating. He strives to create a relaxed and supportive group atmosphere while encouraging his students to gradually grow comfortable with increasingly challenging material.